BREXIT, or Brexit, is a portmanteau of Britain and exit. It is modelled on Grexit, a term that was coined as shorthand for the potential withdrawal of Greece from the Eurozone and possibly also from the EU in the wake of Greece’s severe financial crisis in the early 2010s.

The leave-side won with 51.89 percent of the votes. The referendum was non-binding, but Prime Minister James Cameron announced that he would adhere to the wish of the voters and commence preparations for invoking Article 50 of the Treaty of the European Union (“the EU exit clause”). New Prime Minister Theresa May later announced that she planned to invoke Article 50 before the end of the first quarter of 2017. Since up to two years of negotiations follow the invocation of Article 50, her announcement put the expected date for a completed Brexit somewhere in March 2019. 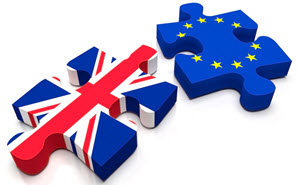 The terms hard brexit and soft brexit are used informally to denote to different scenarios.

A hard brexit is generally described as a situation where the United Kingdom leaves the European Union and then trades with the EU like it does with any other non-EU member country, i.e. under general World Trade Organisation rules. In such a scenario, the UK is under no obligation to participate in any free movement of people between the UK and the EU.

A soft brexit is a situation where the UK and EU negotiates one or several agreements that causes them to have a special relationship. The UK could for instance remain a participant in the EU single market for goods and services, but in order to achieve this the UK might have to accept at least some free movement of people between the UK and the EU.

Once it had been established that the leave side won the 23 June referendum, Prime Minister James Cameron announced that he would resign from his post. He stood down on 13 July and was replaced as Prime Minister by Theresa May.

Several other notable changes were made in conjunction to this.

In the Labour party, Jeremy Corbyn lost of vote of confidence and the process of finding his replacement commenced.

Less than two weeks after the referendum, UKIP leader Nigel Farage announced that he was stepping down as party leader.

Until the Lisbon Treaty came into effect in December 2009, there was no stipulated method for willingly leaving the European Union once a country had become a member. Member states could be expelled, but there was no clear path available for a member state that wished to withdraw its membership on its own accord.

The Lisbon Treaty changed this, by creating Article 50 of the Treaty on European Union. At the time of writing, no member state has ever invoked Article 50, but the UK seems poised to be the first.

Brexit will take place on the date that the withdrawal agreement enters into force, or – failing that – 2 years after the date when the European Council was notified of the United Kingdom’s decision to withdraw. There is a loophole available: the European Council can, in agreement with the withdrawing member state, unanimously decide to extent the negotiation period beyond 2 years.

Can the UK rejoin the European Union after the Brexit?

“If a State which has withdrawn from the Union asks to rejoin, its request shall be subject to the procedure referred to in Article 49.”

For how long has the UK been a member of the EEC?

When the European Economic Community (EEC) was created by the Treaty of Rome in 1957, the United Kingdom was not a signatory. It would take until 1963 before the UK applied to join the community. This application, and a subsequent one in 1967, were both vetoed by French President Charles de Gaulle who claimed that Britain’s economy was incompatible with Europe and that Britain harboured a deep-seated hostility to any pan-European project.

The Brits waited until de Gaulle was no longer president of France before applying again in 1969. This time, their application was approved.

The Treaty of Accession was signed by Conservative Prime Minister Edward Heath in January 1972. UK’s membership of the EEC came into effect on 1 January 1973.