Following the EU referendum on 23 June, a group of pro-remain teenagers could be seen protesting the Brexit win in Parliament Square on 24 June. 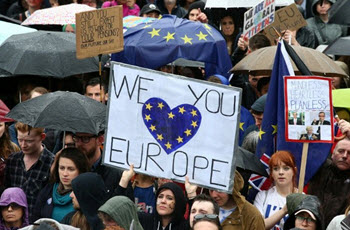 A reporter for the London Evening Standard spotted two teenage girls carrying signs saying “Please sir, can we have a choice?” and “Where was my vote?”.

The protesters, aged 17 and below, were too young to vote in the referendum. Based on recent analysis of voting patterns, older voters appear to have swung the EU referendum result in favour of leaving the EU, while young voters overwhelming supported the pro-remain side.

Prior to the referendum, a petition was launched calling for the lowering of the voting eligibility age from 18 years to 16 years in this historic referendum, arguing that young Brits would have their lives seriously impacted by a decision in which they had no say. The House of Lords wished to give that age group the chance to vote in the referendum, but their move was blocked by the House of Commons.

While some teenagers took to Parliament Square to voice their discontent – some of them carrying placards saying “I’m not British I am European” – others preferred to utilize Twitter, banding together under the hashtag #notinourname.

How did the young voters vote?

In general, turnout was considerably lower than average in areas with a higher proportion of young residents.